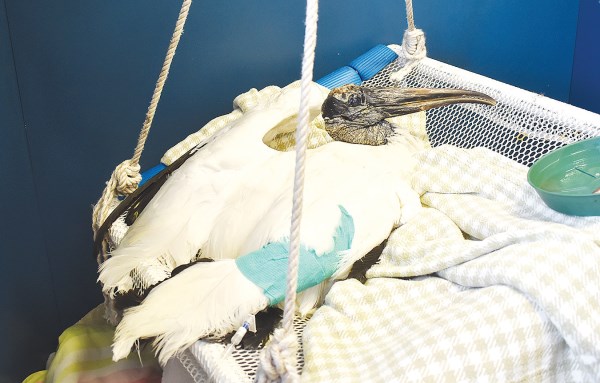 The wood stork (Mycteria americana) is a large black-and-white waterbird with long legs and black flight feathers. It breeds in Florida, Georgia and the Carolinas, while non-breeding wood storks can be found throughout North America and into northern Argentina.

While they are often the same size, wood storks differ from herons by the size of their bills (thicker) and shape of their bills (more curved than herons). A wood stork also has a featherless neck and head, with gray rough, scaly skin covering that area.

At CROW, an adult wood stork was admitted after being found immobile for several days in Matlacha. Upon examination, the patient was unable to lift its head, had muscle weakness and some inflammation of the eyes. At first, veterinarians suspected red tide poisoning.

The muscle weakness may have increased due to the patient’s immobility for a number of days.

“Muscle atrophy is a slow process that occurs over time and the longer a patient is debilitated, the more muscle atrophy we can see,” said Dr. Laura Kellow, CROW veterinarian intern. “This particular patient was weak on initial examination, but also became progressively weaker over the course of two days after admission despite intensive care, leading us to believe that the weakness was from the systemic disease or neurotoxin rather than directly from muscle atrophy.

The wood stork was given supportive care and medications, and a swing was built for the patient to sit in and strengthen its legs.

“The wood stork is receiving IV fluids, IV antibiotics, antifungal medications (and) supportive care such as physical therapy with the technicians twice a day,” said Dr. Kellow. “The wood stork receives force feedings of whole fish. Eventually, it could transition to a more varied diet, if eating on its own.

“The swing is a great tool to allow the wood stork to complete physical therapy in a lower-stress manner, and it has been making daily improvements in overall strength. For instance, over the past week, the wood stork has been placing its feet better and been able to bear its own weight unsupported occasionally. (It) is also holding its head up on its own, when initially it presented hanging its head. ” Red tide poisoning may not be the overall cause of the bird’s illness.

“Although this patient was initially treated with intralipids for brevetoxicosis or other lipid-soluble toxins, we do not believe it is the cause of the patient’s illness given its presentation and response to therapy,” said Dr. Kellow. “Unfortunately, the list of potential causes of the wood stork’s symptoms is long – including viral diseases such as West Nile Virus, other toxins outside of red tide, and bacterial and fungal diseases.”

Due to this uncertainty, the patient remains under close watch without any timetable tied to its recovery.

“The prognosis at this time is still guarded, particularly given the severity of the patient’s disease,” said Dr. Kellow. “The wood stork will continue to receive medications and supportive care at this time. When we feel that (it has) clinically improved and able to stand on (its) own without support, we will move the patient outside for muscle conditioning.”