The red-shouldered hawk (Buteo lineatus) is known as one of the nation’s most distinctively marked common hawks, sporting barred reddish-pinkish underparts and a solidly banded tail.

This medium-sized forest hawk hunts critters such as frogs, mice, snakes and other small reptiles and amphibians. Like a loggerhead sea turtle, the red-shouldered hawk returns to the same nesting territory year after year. According to the Cornell Lab of Ornithology, one red-shouldered hawk occupied a territory in southern California for 16 consecutive years.

At CROW, an adult red-shouldered hawk was admitted after it was found near the Sanibel Outlets in Fort Myers. The hawk was seen standing in the median of the road with its head hanging for over an hour. During initial examination, the head was still weak, still in a hanging position, and a bruise was noted below the right eye. In addition, the hawk was severely dehydrated.

“A catheter was placed in this patient for intravenous fluid administration,” said Dr. Melanie Peel, CROW veterinary intern, about the hawk’s first 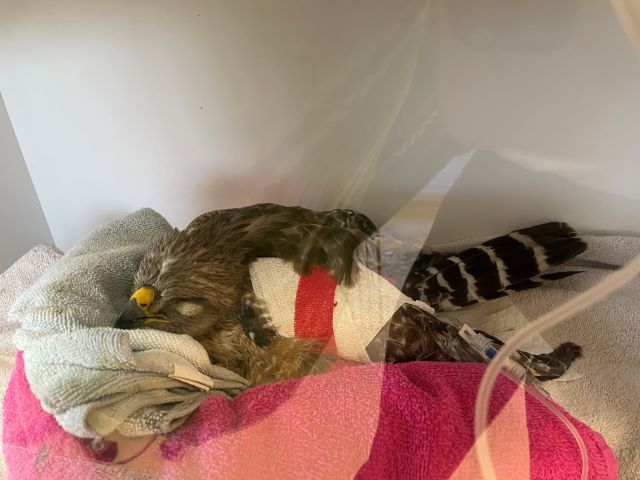 day at the clinic. “The patient was kept in an oxygen cage to aid in ease of respiration. Blood was obtained to evaluate for signs of infection.”

The next day, the patient’s condition seemed worse than the day before, and blood was noted coming from the mouth. Veterinarians expressed concern for rodenticide poisoning or trauma secondary to neurological signs from possible West Nile Virus.

“We suspected this patient either had rodenticide toxicity, which can cause spontaneous bleeding due to altered coagulation or had internal bleeding from trauma of some sort. Both of which may have caused blood to be present in the mouth,” said Dr. Peel. ”West Nile Virus infection was only one of our differential diagnoses for this patient, but was not confirmed, as this requires more testing. West Nile Virus is not uncommon in this region of the U.S. and causes neurologic signs in red-shouldered hawks. It is also not uncommon for these birds to fall out of trees due to their neurologic signs, which was another differential for possible trauma.”

“Ambassadors have been utilized in the past for successful transfusions,” said Dr. Peel. “In addition to education and occasional temporary foster situations, they can aid in the medical treatment as well. Transfusions can be necessary after severe blood loss related to trauma or rodenticide poisoning, as two examples, which can often be successful in helping rehabilitate these animals if they are not too severely affected.”

The patient continued to receive supportive care and remained under close monitoring. Sadly, the blood transfusion and efforts from the veterinary staff were not enough to help the very sick patient.

“Unfortunately, the systemic disease caused by the possible diagnoses was too advanced and severe, therefore the blood transfusion did not help this patient,” said Dr. Peel. “A quality-of-life decision was made for this patient since clinical signs were not improving. Humane euthanasia was ultimately elected.”