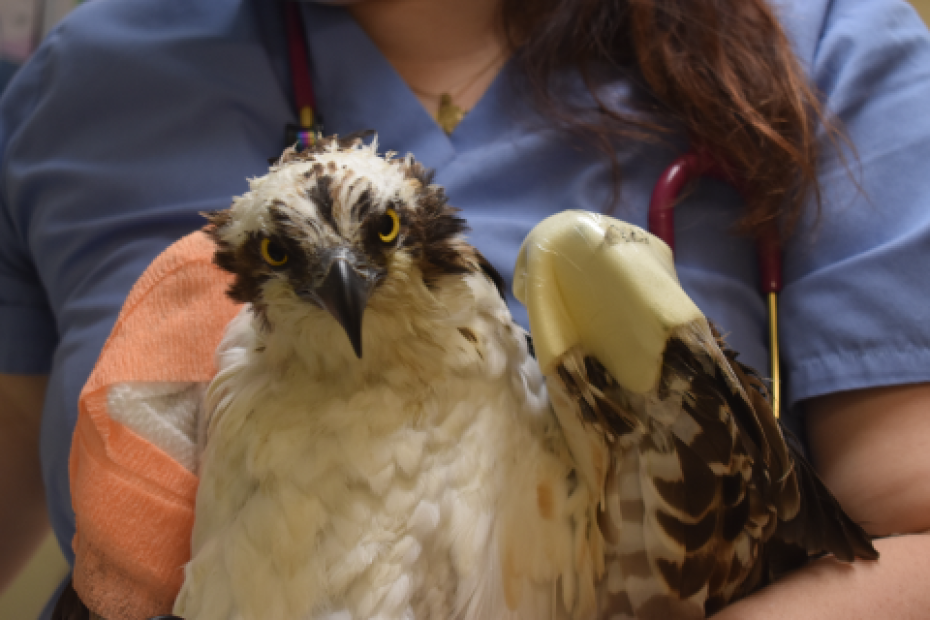 The osprey (Pandion haliaetus) has some similar features to an eagle, but there’s no denying that there are distinctions that set each raptor apart. The osprey is smaller in size, has a short black beak instead of a large yellow one, has grayish feet instead of yellow talons and lives in nesting platforms by the open water instead of trees.

While both birds of prey have an affinity to fish, it is the osprey that folks called a sea hawk, river hawk and a fish hawk at various times. These raptors are different because of their reversible outer toe that allows them to grasp with two toes in front and two behind. Barbed pads on the soles of their feet also help them grip slippery fish.

At CROW, an adult male osprey was admitted after being found in the water unable to fly near the Sanibel Causeway. This bird was lucky enough to have been rescued by a Jet Ski rider. Once examined, veterinarians found and x-rays confirmed a right ulna fracture, an injury that grounds a bird due to its relation to flight muscles and secondary flight feathers.

“An ulna fracture is a very common injury. We see them in all sizes of birds,” said Dr. Melanie Pearson, CROW veterinary medicine intern. “We are treating a northern mockingbird with an ulna fracture right now too.”

The break was able to be stabilized externally using a wrapping to limit movement.

“External stabilization means stabilization without surgery. Sometimes a splint is used, but in this case, we used a technique called a figure-eight wrap,” said Dr. Pearson. “The wing is completely flexed and bandages are wrapped around it in a figure-eight pattern. The other bones of the wing act as splints to keep the middle bone (the ulna) straight.”

During his time at the clinic, the patient’s bandages will be changed every three days, and physical therapy (PT) on the injured wing will be performed, according to Dr. Pearson. He will continue to receive supportive care and bandage changes as he recovers.

“We coordinate bandage changes with the physical therapy, since we need the bandage to be off in order to do the PT,” she said. “We typically estimate four to six weeks for an ulna fracture to heal, depending on the size of the bird and the location and severity of the fracture. We will keep the bandage on for the majority of that time, and once the fracture is stable enough to take the bandage off, the patient will be on cage rest until it is fully healed.”

Once the wing is fully functional, the osprey will be moved outdoors for exercise.

“After the fracture is fully healed, we will flight test the patient in an outdoor aviary. It will be at least another two to four weeks before we expect to flight test him,” said Dr. Pearson. “Once we are confident that he is comfortable flying and off all of his medications, he can be released.”