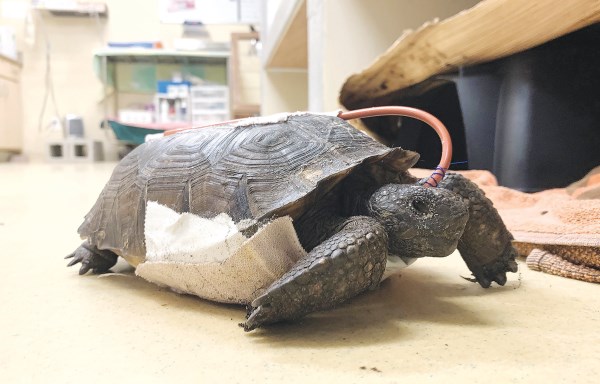 The gopher tortoise (Gopherus polyphemus) is a docile creature that uses the claws on its feet to dig burrows for its underground home that also provides shelter for many other animal species. While this type of turtle can probably bite back to protect itself, it usually does not and instead tends to pull its head into its shell and use its front legs as a shield.

At CROW, an adult female gopher tortoise was admitted after a dog attack in Fort Myers. Upon examination, the patient had multiple shell fractures as well as a large soft tissue injury. Veterinarians administered medications and bandaged the wounds.

“The soft tissue injury is significant because parts of the pectoral muscles were destroyed. While it was relatively fresh, some parts of tissue didn’t survive the injury and had to be removed in order for it to heal appropriately,” said Breanna Frankel, CROW rehabilitation manager. “The tortoise is fully able to use all limbs, and limitations should be minor.

“There were three minor fractures that only required bandaging – the front left carapace, the back right carapace and back left plastron,” said Frankel. “The front of the plastron did not have fracturing, it was mostly missing parts of the shell, tissue and muscle following the dog attack. This injury has only required bandaging as no fracture repair was necessary.”

Nine days after intake, the patient underwent surgery to remove the damaged tissue. A feeding tube was inserted during the process.

“The feeding tube was not placed through damaged tissue, but it was placed within a few inches,” Frankel said. “The tube is actually surgically placed via the side of the tortoise’s neck and follows the esophagus directly into the stomach. This allows us to offer additional nutrients and oral medications without consistently opening the tortoise’s mouth.”

Since the operation, the patient has shown improvement.

“Fortunately, this tortoise started eating very well on its own and does not require supplemental force feeds,” Frankel said. “It enjoys grazing outside and eating natural greenery as well as salads’ offered by the rehabilitation staff.”

Veterinarians will continue to monitor her progress until she is approved for release.

“The prognosis is gradually improving as the tissues have started healing to the point they no longer require topical medication and are starting to heal over nicely,” said Frankel. “The tortoise eats on its own and does its own physical therapy when taken outside to graze. Overall, this patient is doing well clinically, but still has a guarded prognosis.”

Time will tell if the status of the gopher tortoise will be elevated to allow her to be released. Until then, the patient is in good care as she works her way back from a traumatic injury.

“There should be minimal limitations if/after release because this tortoise is able to move completely on its own and it eats very well,” said Frankel. “The only piece missing for this female is part of the gular scute and the most forward part of the plastron. The males use their gular horn to fight for territory or try to win over females but, as a female, she doesn’t have to worry about that.”