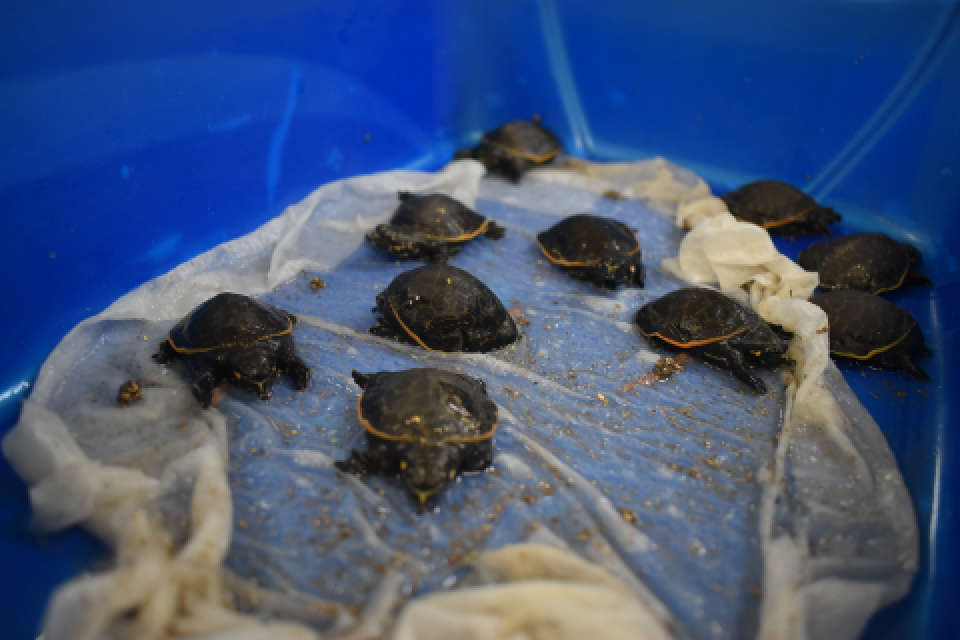 Florida softshell turtle eggs (Apalone ferox) come from the largest species of softshell turtle found on the continent. The freshwater reptile has a flattened shell, an elongated head and a snorkel-like nose that distinguishes it from other softshells.

Florida softshell turtle hatchlings have a lighter upper shell color with yellow and orange markings and a carapacial rim. They are said to be fully developed at birth and are able to fend on their own.

At CROW, 12 hatchlings emerged from incubating Florida softshell turtle eggs that hatched on July 26. Their mother (patient #22-2450) was admitted in May after suffering spinal and shell fractures from a hit-by-car incident and unfortunately did not survive her injuries. CROW staff members were able to extract her eggs and incubate them in hopes they would hatch.

“The typical incubation period for many aquatic turtles is 50 to 70 days and these hatched right around the 65-day mark,” said CROW Rehabilitation Manager Breanna Frankel. “We were able to see the eggs on radiographs, which indicates they were calcified enough for laying. After (their mother) passed away, we harvested the eggs within 24 hours and put them in substrate to incubate. We do our very best to harvest as many eggs as possible as long as the eggs are in viable condition, and it must be done quickly, within a day of the female passing.”

Once the turtle hatchlings emerged, they were found to be in overall great health and were housed in CROW’s reptile room where they received supportive care before quickly being released into the wild.

“Turtles are self-sufficient immediately after hatching and their parents do absolutely nothing for them in the way of providing food, shelter or protection,” said Frankel. “After hatching, we cleaned them off and placed them on a wet paper towel so the rest of their yolk sac could absorb. Once their yolk sac had absorbed, they were transferred into a shallow water habitat. We ensured a clean habitat and provided food options but otherwise didn’t have to do much.

“As the yolk sac absorbs, it provides them enough nutrients until they can find suitable food and shelter within a few days. As soon as their yolk sacs fully absorbed, they were cleared for release. They were only at the clinic for a matter of one to two days before being released.”

The hatchlings were separated and placed in two different locations to begin their lives.

“We chose to spread these hatchlings out over a couple different suitable habitats within Lee County as we did not have a precise location for where mom was found,” Frankel explained. While there was tragedy in May after losing the pregnant Florida softshell turtle, there is now triumph to have her eggs hatch and all hatchlings turn out overall healthy.

“Not only is it heartwarming for staff, students and volunteers to see the babies make it after such a tragedy, but it is also incredibly important for their species as a whole,” said Frankel. “As a native species, Florida softshell turtles are a vital part of our ecosystem and every animal plays a particular role. Release is our ultimate goal, but after such a sad outcome, to have so many babies successfully hatch and return to the wild is somewhat of a miracle.”